This website uses the latest technology. Unfortunately you’re using a browser that is no longer supported. Please download one of the following browsers to gain the full experience of the website.

This Renault Master is powered by the 2.3-litre twin turbo-diesel engine now found in Nissan’s latest Navara, and with 120kW and 360Nm on tap it’s at the pointier end of this comparison. Along with the Fiat Ducato it adopts a front-drive format, with the power fed down to the ground via a six-speed manual transmission. This medium-wheelbase, mid-roof example is priced at $45,490 (plus on-road costs).

Renault dominates the European van scene and that prowess is evident in its latest Master.

Simply, it does everything well, while there are any number of thoughtful and practical features scattered throughout the vehicle.

Introduced to the Australian market at the start of last year, manual models like the one on test here were updated with a more powerful Energy dCi165 engine. A four-cylinder turbo-diesel with a twin-turbo setup, its 120kW/360Nm gives it an extra 10kW/10Nm compared with the previous dCi150, which remains as the sole powerplant when paired with an automated-manual transmission (AMT).

Other changes included the adoption of an idle-stop feature as standard on manual models and an upgraded stability control program, now with a hill-hold feature, trailer-sway control and Grip Xtend – an enhanced traction control for use on soft ground.

The Master’s door opens wide to reveal a very tastefully finished cabin. There’s a generous step to aid entry but surprisingly no grab handle, while the usual expanse of cabin plastics are softened by the two-tone design and plenty of flowing, rounded and rather organic mouldings. The general fit and finish of the plastics is impressive – it’s a cut above what you might expect in the commercial arena.

In general it’s a pleasant place to be, with any number of storage compartments and trays to store all manner of items both large and small. There are cupholders and bottleholders right where you need them and the centre seat back folds forward to reveal a large flat workspace that can be angled towards driver or passenger. It has yet another storage tray and two more cupholders.

With the bulkhead in place the cab is remarkably quiet – the Master is only outdone by the Ford Transit in this respect – and the engine note is really quite subdued, with a hint of a whistle from the turbo lending it a little bit of character.

We had no complaints about the Master’s performance, either. It was bettered only by the Mercedes-Benz Sprinter in our performance testing, the runs hampered by changeable weather conditions as they were, and in the lower gears it powers away from idle to just shy of 4000rpm. 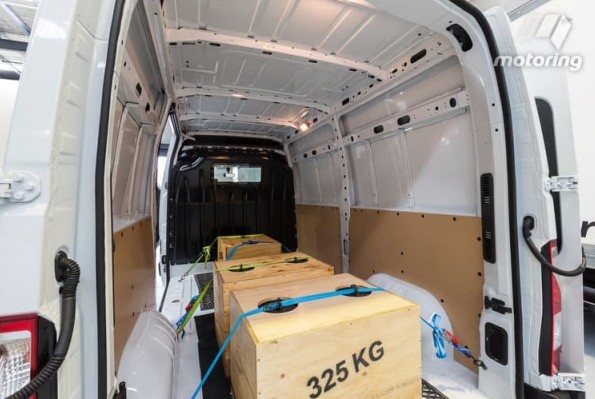 The manual gearbox is a standout – the Master shifts smoothly and cleanly through its ratios, aided by a light clutch with a quick take-up. It was the nicest manual gearbox on test, just ahead of the ‘box in the Ford Transit.

The ride isn’t quite as refined at the Transit or Sprinter but it’s equally as good as anything else in this company, loaded or empty. Like the Transit, the Master is nicely balanced through the bends and displays only a minimal amount of body roll, while it’s anything but harsh over speed humps after which it regains its composure quickly.

As a front-drive van the Master’s turning circle is getting up there but it’s far from outlandishly large, while it’s 3.75 turns lock to lock at the wheel. The steering wheel itself is adjustable for tilt but not reach; and features large buttons for the cruise control with a separate pod behind it for Bluetooth telephony. 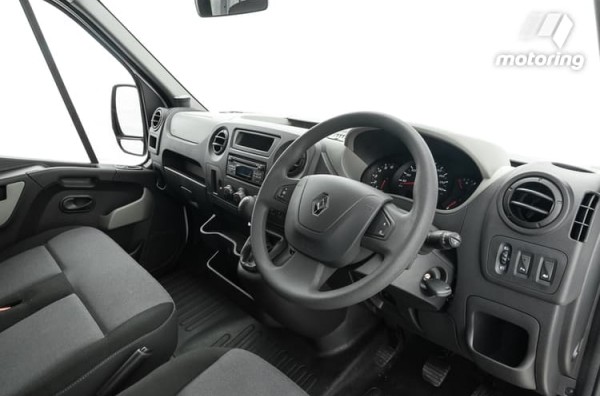 The load bay is accessed by a side sliding door and two 50:50 barn doors at the rear. It’s the usual bare painted steel affair but the steel glazed bulkhead is standard, as is mid-height internal wall protection.

The tie-down anchor points are small but you do get 10 of them, and the rear doors open to 270 degrees. Importantly, the Master had the lowest load floor height of the bunch – 510mm – while it also had the second-biggest measurement between its wheelarches (1380mm). There were no grab handles either at the side or rear.

Renault credits this L2H2 Master with a 1583kg maximum payload capacity. That’s bettered here only by the Daily, while the French vehicle’s 2500kg braked towing limit falls toward the lighter end of the scale.

On the safety front, the Master makes do with just two airbags – well behind the Transit’s six – and side and curtain airbags aren’t available even as an option. It does, however, benefit from the aforementioned updated stability control program.

The Master triumphed when it came to fuel economy, sipping just 8.7L/100km over the duration of the test. That’s 0.6L better than the next best model, the Sprinter.

Renault makes plenty of noise about its aftersales backup and in this respect it stacks up well. The company offers a three-year/200,000km factory warranty that can be extended by one or two years. The warranty period include roadside assistance, while service intervals are pegged at 12 months/30,000km.

Last year saw Renault roll out its Pro+ network of dealers with LCV specialists – people who know the brand’s commercial vehicles inside out, and who can work with customers to fit their van out to meet their specific needs.

Taking its fuel economy, performance, easy driving nature and long list of pragmatic standard inclusions into account, and its competitive purchase price, and Renault’s Master stacks up well on just about every front.

It blends load-lugging ability with a high degree of comfort and all-round capability – if the lack of a traditional auto isn’t a deal breaker, this is one van that’s more than the sum of its parts.